Katsura wrote:I don't know what to think of FPSE anymore The last updates produce more and more rubbish. You (schtruck) always said "the sound is now almost perfect" but it never was for me. Stop saying that! Do we need that many Audio options? I think they just confuse other users. Take your time, don't hurry! Updates should make things better, not more complicated or even worse...

One thing is clear - Schtruck is trying hard to make FPSE a better and better product. As I've said in other posts, the problem schtruck is facing is hardware compatibility. In order to make FPSE better, he has to deal with hardware, and deal with drivers/ROM images. There's no real way around the issue of needing more options for compatibility with different hardware. This is the EXACT SAME thing that we went through with emulation on the PC. It was confusing as .... heck .... and to get things "great" you had to tweak and tweak - or get a guide. This is the balance - performance vs compatibility. Yes, that many audio options ARE needed - if he wants to have the best performance on all devices. The alternative would be to have a standard platform with standard ROM images - that option is available, but it is not android. That being said - I agree. Schtruck, in his eagerness, often puts out too many changes in one update. This may not be right, as we've seen. But his motive for doing so cannot be doubted - he wants FPSE to be better and better.

I also agree that the options confuse users. I think that for the sake of making FPSE user friendly, the menu setup needs to change. There needs to be a 'basic' and an 'advanced' option. If users want to tweak things, they can go into advanced. Otherwise, just a basic menu is needed. Schtruck's new menu goes a big step in that direction by making the settings menu something that is below the main menu. But the settings menu itself is still difficult to traverse. Better documentation would help this, but still I think an 'advanced' menu would be more appropriate. The bigger and more difficult question is, what should go in the 'advanced' menu.

6502 wrote:Cheats don't work here either but they do seem to poke something in memory because they produce strange side effects in some games. I'm using confirmed (in previous version working) codes as well.

Some options are not persistent (enable hardware acceleration, enhanced audio). They are disabled again after FPse restart. But i have to admit i've never seen any improvement or change at all after enabling these beside the fact that 'hardware acceleration' once fixed a freeze problem for me (pressing <menu> button froze display buffer until FPse instance got reloaded). That problem is no more present in recent versions though. Not sure if these options are valid at all for my hardware.

I like that you gave your hardware - very nice input. But what games have sound issues? What types of issues? How is it different from before?
The hardware acceleration is only for 'old software' more I believe. If I'm right, schtruck should remove it from the 'blitter' menu, like he removed it from the OpenGL menu. The enhanced audio doesn't seem to do anything for me either - but then I know that my hardware doesn't work with it. We know it doesn't stick, it seems schtruck may have missed that. Or - it may be that the enhanced audio can break games so he intentionally makes it be something that must be chosen. That was important before the new menu system, but with the new menu system he probably can allow it to stick.
FPSE OpenGL info - click here
Top

@bluezeak:
I don't have any sound issues. Just cosmetics (the options don't stick). But as you said they are not of much use for my hardware there's no real problem here.

Luutarhuri wrote:do you see all the cheats on your cheat list?

Yes, i can see all codes (only tested one game so far though). There's a weird entry at 1st line though. Not sure if that causes any error. My manual *.txt file with identical codes didn't work either though.
These codes are downloaded from internet. The 'infinite time' did work properly before. 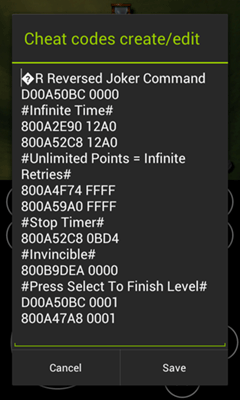 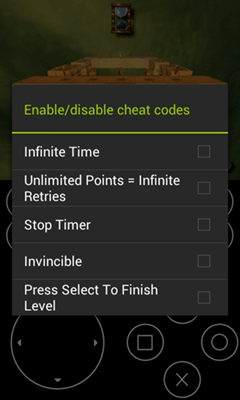 I thought blitter mode was more compatible bedside it used a new API that worked better with Android. that's why schtruck made it the new default option. I know s couple petiole did say they had issues with it though.
FPSE OpenGL info - click here
Top

My sound is nearly perfect!

Amazing job and thanks!

There is one small thing though... the app crashes from time to time. I try to remedy this by saving as much as possible, but anyone else having a similar problem?
Top

Hi thanks for supporting Xperia play.

Pads works fine but i found them a bit annoying at least "me" i would like to use touch pads just like L2 and R2...One big pad for R2 and the another big pad to L2 lol, now i press sometimes touch pad and i move accidentaly

I hate to QQ <.< but thanks for supporting Xplay.

Also Lowering the sound latency has some effect on performance? Im playing with Opengl so im always trying to get better performance

For me sound is still bad after all this updates. Now its not only xenogears,but for example breath of fire 4 - there i can clearly hear stuttering with sertain intervals. Sound was PERFECT in .45 revision,i think you need to check what was changed after this revision,and revert it,because in that rev. there was no latency options and sound was so good. Also some settings don't save in emu,for example portrait orientation. And when i try to change game pad size emu always hangs and restarts thus not changing size of gamepad,check it out too please.

But despite any bugs and problems,fpse is amazing emu and i really appreciate Schtruck's work
Top

if someone could take the time to have a look and suggest settings/ help then it'd be greatly appreciated. It's in game specific.
Top

I have Fixed a bug in cheat codes too.

schtruck wrote:Will release 0.10.52 in few minutes, because it worth a lot of!

Looking forward to it! I'll update this post with how the new version sounds...
Top